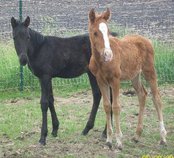 These foals came from a nurse mare farm in Kentucky. Nurse mare farms breed horses so that they can provide a lactating mare for a more valuable foal either when the more valuable mare (usually a Thoroughbred) goes back to be bred or something happens to her.

The foals that these nurse mares give birth to are a byproduct and tend to just be tossed aside. The owners of these nurse mare farms do not care about the foals. They usually have anywhere from 100 to 800 mares in their care, and are doing it to make money and do not care about the welfare of the animals. Some of the foals are actually disposed of by being shot and the ones that aren't shot are lucky to make it to adulthood. Many are often underweight, sick, and not well handled.

Five of the babies SHARE rescued came from the nurse mare farm. The sixth filly was a last minute addition when a SHARE volunteer saw her laying there. She was very sick, and missing much of her hair--she could not be left there to die.

When these poor babies arrived at SHARE, all were underweight, not handled much, and were sick with pneumonia. They have all recovered well, all active, healthy, and enjoying a good life.

SHARE would really like to help more of these babies as there are numerous nurse mare farms in Kentucky. Unfortunately, this endeavor is extremely expensive with the travel expenses and the medical bills these foals bring. We would like to organize another trip to Kentucky to bring up nurse mare foals to go directly to families to raise. If you would like to help by taking in a nurse mare foal or donating to our nurse mare program please contact us and please spread the word!

Read the News Gazette article that follows about S.H.A.R.E. and the babies.

A herd of youngsters

(Click to read our latest updates on the foals.)

The world is a brighter place today for six rescued foals now residing at the Society for Hooved Animals’ Rescue and Emergency (SHARE) in Dewey. Born in Kentucky to nursing mares, the two colts and four fillies could just as easily have been thrown away as sold for $200 a piece to the rescue, said equine humane investigator Linda Hewardine, co-founder of SHARE.

“Two of us were up for 48 hours to drive to Kentucky to go and get them,” Hewardine said. “We were there in the rain, after dark, loading these foals that had never been touched or had halters on”

The foal of a nursing mare is born displaced. It has already served its function by the time it comes into the world – to initiate lactation in the nursing mare.

Hewardine explained that these foals are the byproduct of a big money enterprise that seeks to get as much production as possible from more valuable breeding mares. To that end, it’s common practice to impregnate breeding mares soon after they give birth; nursing mares are then brought in to nurture the highly valued offspring, she said.

A nursing mare and her own foal are soon separated, said SHARE board member Lori Cooper. The foals would not be useful for three to four years, and caring for them for that period would be expensive and time-consuming.

“Unfortunately, horses are a dime a dozen – and that’s not good for their safety,” Cooper said.

Added Hewardine: “If they aren’t rescued, they are slaughtered.”

Five of the foals are quarter horses, and one is a breeding stock paint. The filly with a star on her nose was sired by a reigning grand champion. All are beautiful and gentle-spirited.

When they first arrived at SHARE, all six foals had pneumonia but were otherwise in fair shape. SHARE members set to work. They administered antibiotics with shots twice a day and monitored the foals’ temperatures, as well as their breathing, which they checked with a stethoscope. Four of the horses responded very well and are no completely recovered. Two of the horses, including the smallest one, are currently on their second round of treatment, and are expected to make a full recovery, Hewardine said.

“They should all be healthy; there are no other concerns,” Hewardine said.

The oldest is a colt born in January, now 6 months old. Four of the foals are around 3 months old. The youngest is just 1 month old and is much smaller than the others. Her fur is a bit patchy; she has a skin infection from having lain in her own urine in a field where she went overlooked.

"I thought we were getting five,” Hewardine said. “But then there was this one laying in the field. The man didn’t even know she was there, and he threw her in for free. We are treating her skin with a fungicide, and the fur will grow back. She will be a good horse for someone.”

At this age, the foals spend much of their time sleeping in their shared stall. When they want some exercise, they are turned out in a pasture separate from the other rescue horses to enjoy the outdoors. They tend to stick close together for protection, a herd of youngsters.

“They will be here until we find homes for them,” Hewardine said. “They have to be 6 months old and healthy to be adopted out.”

Feeding the six foals is expensive, and Cooper said that the rescue is looking for sponsors for each foal to offset the cost.

Every four days, the six foals go through a 50-pound bag of formula and consume a 50-pound sack of feed at a cost of about $135, Cooper dais.

They are fed three times a day, with buckets of formula left out in between to ensure that each gets sufficient nutrients.

Sponsorship is set a $100 per month and is a one- to five-month commitment, depending on the age of the foal, she said.

With the proper environment and training, these will be excellent horses for someone.

“They gentle down very quickly because they’ve never had abuse or a negative experience with people,” Hewardine said.

Hewardine said she has already heard from the same seller that he has three more foals to get rid of, and she would like to trailer them up from Kentucky, but for that, she would need a list of adoption applicants that were preapproved and ready to take them.

“The only cost to the adoptive family would be our actual cots – whatever we pay the seller for the horse, plus the cost of gas to trailer them up here,” Hewardine said.

The SHARE facilities, housed on Hewardine’s property, are at capacity with 30 rescue horses in addition to 15 horses of her own. Six of the rescue horses have adoptions pending and are just waiting on final approval, based on letters of recommendation from applicants’ veterinarians.

It’s a busy place, with frequent visits from volunteers who come to help care for the animals, trainers who start the horses under saddle and an equine veterinarian who makes sure they are healthy.

SHARE was started in December 2003 by a number of local volunteer humane investigators who had been working out of HAHS (Hooved Animal Humane Society) in Woodstock. When they decided they needed a place closer to home to house rescued horses, Hewardine volunteered her land and buildings.

Adoption applicants are required to commit to caring for their adopted horse for its lifetime. A SHARE-adopted horse cannot be sold and must be returned to SHARE if that commitment cannot be fulfilled.

Before applicants are approved to adopt, they receive a home visit from one of SHARE’s eight investigators. After an animal is placed, there are one to two follow-up visits per year in the first two years, more if there are concerns, Hewardine said.

The cost of adopting depends on the expenses incurred by the rescue for the animal, with the typical price in the range of $400 to $500.

American Express cardholders: You can donate your Rewards points to us, we get $10 for every 1,000 points you redeem, or use your card to donate and receive rewards points! Click the banner to make a donation to us using American Express.

VISITS ARE BY APPOINTMENT ONLY!

We can always use folks that are willing and able to help - Volunteer.

Currently we are not accepting any new owner turn-ins. We will continue to respond to investigation requests and work with the Dept of Agriculture and other authorities to aid in the rescue of animals where warranted.